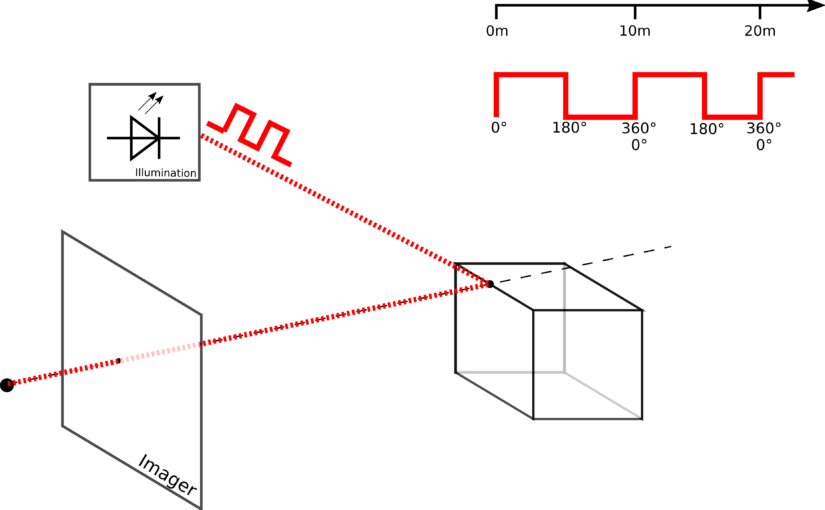 The ifm O3D series of cameras and sensors provide parameters to change the frequency mode. What is a frequency mode and which settings to choose?

The principle is analogous to receiving different radio channels at different frequencies – in case of ToF cameras in the form of light.

What are frequency modes?

For measurement of object distances, the distances shown in above figure need to be divided by 2, because of the way forth and back.

If you are interested in a more detailed explanation, see subheading The Ambiguity Problem for more details.

To be able to measure beyond 5m (10m light path), the O3D supports multiple-frequency modes. Internally the camera takes multiple images with two or even three different modulation frequencies and combines the data to one frame without ambiguities.

Here is a list of measurement ranges with no ambiguity:

The frequency mode can be set via custom software. Therefor a parameter string is specified in the form of [frequency-mode]_[exposure_mode]. See the right column of the table. The exposure modes are discussed in another post.

Whenever the O3D uses multiple frequencies for each frame, be aware of potential interferences with other devices.

That means, that our light wave has a wave length of 10m. Beyond 10m it repeats. When measuring, the light wave needs to travel forth and back, thus the distance to objects without ambiguity is 5m.

See also the below figure. 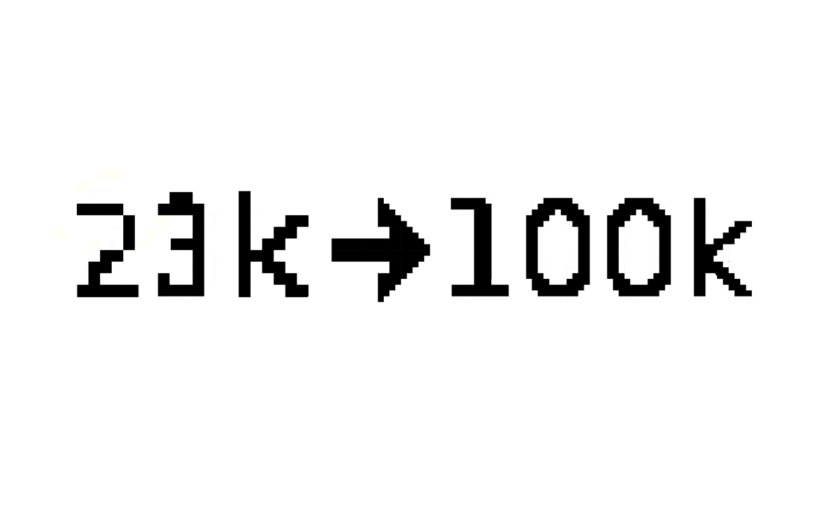 The O3D camera series of ifm electronic provides 23k of lateral resolution, 176×132 pixels. However, the actual imager has a 100k resolution, 352×264 pixels. Is it possible to use the native resolution? – Yes, it is. This article shows how to do it and what to be aware of.

Why only 23k per default?

The 23k is the result of 2×2 binning of the original pixel matrix. Binning means that 2×2 pixels are averaged together to provide a single data value.

There are certainly many reasons, why ifm decided to reduce lateral resolution. Probably the main reason was to increase data quality. The more pixel are combined together, the less noise we get.

Here is a (not complete) list of potential benefits of a lower resolution:

What are the side effects of 100k?

The side effects of increasing the lateral resolution may include the following issues:

The resolution can be set via a hidden (but officially supported) parameter. 100k mode can be set for each application on the O3D respectively. Make sure there is already a valid application running on your device.

The ifm3d suite consists of C++ libraries and tools to run the O3D and O3X sensors. Download the source code here: https://github.com/ifm/ifm3d

Once followed the build and install instructions, you can use the ifm3d command to configure the sensor. The idea proposed here is the following:

The web-interface on the O3D can be accessed with the following URL:

Paste that URL into your favorite internet browser and replace the IP address if needed.

The underlying communication is based on xml-rpc, a protocol that can be implemented in custom programs. A documentation of the O3D’s xml-rpc interface can be found on the vendor site, http://www.ifm.com. Search for O3D.

To start communication with the camera, we need to get a session ID from the camera. Therefor we use the “requestSession” method and two parameters:

For sake of simplicity we assume no password protection. Thus both parameters are empty. However in the params mask we need to write all parameters as strings in quotation marks, thus we input two empty strings and click “Submit”.

Whenever a session is opened, the server expects a I-am-still-there-don’t-close-the-connection signal, also called heartbeat. The heartbeat can be invoked on the session domain. Click on the newly opened session or add the session string to the URL in the browser address field.

Since the heartbeat interval is only a couple seconds, we need to set it to the maximum value. For manual use it’s too short otherwise. The maximum value is 300 seconds. In the same domain call setOperatingMode to 1. This enables editing. The resolution parameter can be found after going to the edit/application/imager_001 node, either by clicking on the hyperlinks or adding the sub/address to the URL. When calling the method “GetAllParameters”, the Resolution parameter appears:

In order to change the setting invoke the method “SetParameter” with the parameters [“Resolution”,”1″].

Step 5: Save and exit

The save method can be invoked in the application domain. Therefor shorten the URL by the imager_001 node and invoke the save method.

After saving the settings are applied. It is good practice to close session under the session parent node (“cancelSession” method).

The below python script works with python 3 and is based on the very useful o3d package o3d3xx-python which is hosted on github.
You can invoke the script from your command shell: